The Development of Colby Cheese 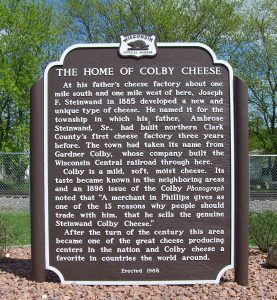 area. What would make this factory stand apart from the others was the development of a dairy product that became the only natural cheese native to the United States.
In the year 1885, Joseph Steinwand, Ambrose's son, created a cheese concept that would become known as Colby Cheese, thus establishing the city in history.

Ambrose and Joseph Steinwand made their cheese in basically the same manner as cheesemakers do today: they separated the solid portion of milk, called curd -- which became the cheese -- from the liquid portion of the milk, which is called the whey.

To start the cheesemaking process, first the milk was warmed. The a substance called rennet was added to the warmed milk. This caused the solids, or curds, to separate from the whey by coagulation. this custard-like mixture was cut into small pieces, allowing the curd to separate from the whey. The mixture was heated to firm the curd and then the whey was drained away.
It was at this point that Joseph departed from the procedure of making cheddar cheese to give this new cheese the high moisture content that makes Colby cheese unique.

After he drained the whey, he washed and cooled the curd in cold water. Then he drained the water, slated and mixed the curd, pressed it into forms and aged it one to three months. In contrast, cheddar cheese is molded into slabs after the whey drains. Repeated turning of the slabs expels any excess whey adhering to the curd. This makes cheddar sharper and drier than the mild, soft Colby.

Today, Wisconsin is the number one producer of all major types of cheese made in the United States, except for Swiss.
On the original site of Ambrose Steinwand's cheese factory stands the present day Colby Cheese Factory, which was built in 1965 by Lawrence Hoernke. It is no longer in operation.

Similar cheese factories dot the countryside in the 4-county area that makes up the Heart of Wisconsin, this nation's largest cheese producing area. The 20 or more cheese cutting, curing and processing plants in the near area market over a billion pounds of "REAL" cheese annually.

During the centennial of Colby cheese the governor of Wisconsin proclaimed Colby cheese, "Wisconsin's Own Colby Cheese," as the only major natural cheese process native to America.

On a spur of the railroad that brought civilization to the territory, you will find a collection of buildings that hold the stories, artifacts and memories of middle Wisconsin.

Complementing the history of the railroad are the historical memorabilia of the dairy industry as well as modes of transportation, machines of the written word and education. It's all part of the Rural Arts Museum located in Colby, Wis.
People interested in preserving area history organized the Clark County Historical Society in 1965. Envisioning the possibilities, it was decided early in the organization's formation that to do the task properly, it would be best to have two places of display in the county.

The Clark County Historical Society was able to negotiate an agreement with the Clark County Board of Supervisors for the leasing of the 1897 Jail, which has become an archive of government and armed services artifacts. To complete it's dreams, the Clark County Historical Society bought the land and building of the Colby Cheese Box Company which had gone out of business in prior years. This became the beginning of the Rural Arts Museum -- a long-raged stronghold of historical data of railroading, dairying, and education: a slice of middle America.

After renovation and planning, the first building secured and relocated at the Rural Arts Museum was the original depot from the city of Colby.
The city of Colby came into existence because the government gave Mr. Gardner Colby certain rights through this territory for establishing a railroad from Menasha to Ashland. The depot today houses much data from the era of the railroad's greatest days.

A 1-room county school has been added to the Rural Arts Museum. It was moved from south of Granton, and, today, is used on occasion by local teachers as a hands-on experience/tool, recalling how knowledge was shared in days past.

The jewel of the Rural Arts Museum is a log home that was used for almost a century before it was dismantled and moved to Colby from the town of Holton. The log home is completely furnished with the furniture form the original site. It was given to the museum by the daughters of the late Frank Schopper, fulfilling a dream he had regarding the home.

The Rural Arts Museum is poised to enter into a second era of development. In the sesquicentennial year of the state of Wisconsin, a new building for displays was constructed on the grounds to compliment the existing structures. Space in this building will allow for rotating displays and proper storage of various gifts and artifacts. Long-range planning also being considered is securing a log barn, a church, and a railroad caboose for the museum.

June is Dairy Month and is celebrated by the Colby Chamber of Commerce and the Colby Future Farmers of America Alumni with a Dairy Breakfast Open House. This event takes place on a Colby area farm on the fourth Sunday in June each year.

Colby Cheese Days originated in 1965, as an event to promote cheese and Colby cheese, the backbone of the economy of the Colby area. Originally, the Colby Chamber of Commerce, VFW Post 2227 and the Colby Lions Club established Colby Cheese Days.

Located in one of nature's loveliest spots, Central Wisconsin, Colby is good living at its best. From work to play, all types of activities are close at hand. Local groups include Lion and Lioness Clubs, VFW and Auxiliary, and the ShowCase Players, a community theatre group. Within the city, there are several recreational areas providing outlets for tennis, softball, basketball, bowling, sand volleyball, horseshoes and outdoor winter sports. During the summer, there are various recreational programs with trained leadership provided by city funding. Also, the CHS Athletic Booster Club sponsors many youth sports programs. And best of all, Colby is only a stone's throw away from great fishing, hunting, camping, skiing and snowmobile trails.